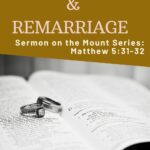 I know so many of our lives have been affected by divorce, and it is a sensitive subject. There is much hurt and pain in many of your lives still by divorce, so my desire isn’t to cause you any more hurt—so please know my heart here before we start to dig in. I always want to be biblical, and the question that we’re answering in all these episodes is to be, “What does God’s Word say?”

Even if this is an area that doesn’t concern you in this season of your life, please stay with me today and listen in. If you are part of the body of Christ, you should desire to understand every aspect of the teachings of the Word of God. I know we’ll never get to everything in this life, but this is an area that you may find yourself giving counsel to others on. It is worth your time to understand these scriptures and interpret them correctly. Understand what your church believes, but in the end, you need to be a good Berean and observe, interpret and apply the text on your own.

I had minimal knowledge of this area when I began working through this episode, and I’m grateful to have spent the time studying through it, and my hope is you won’t just listen, but you’ll dig a bit deeper yourself.

From the beginning—from the creation of Adam and Eve in the garden— God's design was that marriage was to be a permanent covenant. Click to Tweet

31 “It was also said, ‘Whoever divorces his wife, let him give her a certificate of divorce.’ 32 But I say to you that everyone who divorces his wife, except on the ground of sexual immorality, makes her commit adultery, and whoever marries a divorced woman commits adultery.

“The Scripture says that a man becomes “one flesh” with his wife. Marriage is the deepest human relationship. After intimacy, the emphasis is on permanence. There was no thought of divorce—ever! God’s ideal was, and is, monogamous, intimate, enduring marriage. This is what he approves of. Anything less is a departure from the divine model. And the Fall did not change that ideal. We all know that some things possible before the Fall were not possible afterward. But regarding divorce, God’s standard did not change. We not only see this in the very first book of the Old Testament but the very last one.”

From the beginning—from the creation of Adam and Eve in the garden— God’s design was that marriage was to be a permanent covenant.

Sermon on the Mount Podcast Series

Studies in the Sermon on the Mount by D. Martyn Lloyd Jones

The Sermon on the Mount by James Montgomery Boice

Divorce and Remarriage: A Position Paper by John Piper

This Momentary Marriage by John Piper

“In the beginning, divorce was inconceivable and impossible. Jesus quoted lines from Genesis 2:23-24 to emphasize two things. First, the intimacy of the marriage relationship. He says ‘the two shall become one flesh.’ There is no other intimacy like it. It is deeper than one’s relationship with one’s own children. We are not one flesh with them.

The Scripture says that a man becomes ‘one flesh’ with his wife. Marriage is the deepest human relationship.

And second: after intimacy, the emphasis is on permanence. There was no thought of divorce—ever! God’s ideal was, and is, monogamous, intimate, enduring marriage. This is what he approves of. Anything less is a departure from the divine model. And the Fall did not change that ideal. We all know that some things possible before the Fall were not possible afterward. But regarding divorce, God’s standard did not change. We not only see this in the very first book of the Old Testament but the very last one.”

“Without a certificate, she could be subject to exploitation, even recrimination. The certificate also prevented the man from marrying her again. Thus she could not be treated like chattel. Marriage was not something one could walk in and out of. The reason God allowed divorce was the hardness of heart to which the men of Israel had succumbed. It was a divine concession to human weakness—reluctant permission at best!”

“Many look for a way out instead of a way through the problems.” - R. Kent Hughes Click to Tweet

We must say a word about “the exception clause” in Matthew 19:3-12. Here, it is often held, Jesus allows for divorce in the case of adultery. The word, though, is not adultery, but moicheia, typically used for sexual immorality. In fact, the word for “divorce” here is the same one used in Matthew 1:19 to describe what Joseph intended to do to Mary in their betrothal. It is not a real divorce, then, but a separation of betrothed parties. Jesus is outlining provisions for dealing with fornication within the context of betrothal. Thus, this is no exception clause for divorce. This view is not widely held, but it is worth considering in light of the heightened calling Christians look to in the wake of Jesus’ coming into the world.

“It seems far more likely that its (the exception clause’s) absence from Mark and Luke is due not to their ignorance of it but to their acceptance of it as something taken for granted. After all, under the Mosaic Law adultery was punishable by death (although the death penalty for this offense seems to have fallen into disuse by the time of Jesus); so nobody would have questioned that marital unfaithfulness was a just ground for divorce.”

“No matter how rough things are, regardless of the stress and strain, whatever is said about compatibility and temperament, nothing allows for divorce except unfaithfulness and even then it is not to be used as an excuse to get out of the relationship.

The radicalness of what Jesus taught is further underlined in Matthew 5 by its being one of the six statements that begin with variations of “you heard that it was said, but I say to you,” demonstrating the superior righteousness of Christ. The point of these statements is: This is the way a righteous person lives! Thus his or her marital relationship is supremely sacred. Nothing can sever it but unrepentant unfaithfulness—and then it is not an excuse for ending the marriage but it is the sorrowful ground of divorce.”

According to Christ, marriage demands total commitment that only death or the most flagrant, ongoing sexual infidelity can bring to an end.”

“It is also true that Christians who marry out of God’s will and get divorced, remarry (often to Christians) and that God seems often in his great grace to sanctify and bless the remarriage. Does this mean that in this case God has changed his standards? Not at all. But it does mean that even divorce and remarriage, serious though they are, are not unforgivable and that God is always able to start with his children precisely where they are and bring blessing. The churches should never be closed to such people, and Christians above all men should show mercy. Perhaps even if such persons marry in rebellion against God’s will he may bring repentance, and he may yet greatly bless the new home.”

James Montgomery Boice, The Sermon on the Mount

“‘Have you nothing to say about others?’ asks someone. All I would say about them is this, and I say it carefully and advisedly, and almost in fear lest I give even a semblance of a suggestion that I am saying anything that may encourage anyone to sin. But on the basis of the gospel and in the interest of truth I am compelled to say this: Even adultery is not the unforgiveable sin. It is a terrible sin, but God forbid that there should be anyone who feels that he or she has sinned himself or herself outside the love of God or outside His kingdom because of adultery. No; if you truly repent and realize the enormity of your sin and cast yourself upon the boundless love and mercy and grace of God, you can be forgiven and I assure you of pardon. I hear the words of our blessed Lord: ‘Go and sin no more.’”

Martyn Lloyd Jones, Studies in the Sermon on the Mount

“For he that is meek, and a peacemaker, and poor in spirit, and merciful, how shall he cast out his wife? He that is used to reconcile others, how shall he be at variance with her that is his own?”

END_OF_DOCUMENT_TOKEN_TO_BE_REPLACED

Such a simple way to keep God's Word on your mind

How many times in your life have you been correcte

"How would you ever learn grace to pour out your f

Love this quote ❤⁣ ⁣ "There is no more lovel

These are the three tools that I’ve used for man

My impromptu super simple Fall decorating in my ho

[Sarah Edwards] did not permit this soul communion