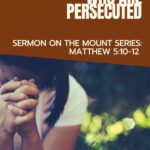 We are coming to a climax today as we finish the last of the beatitudes in our series on the Sermon on the Mount.

10 “Blessed are those who are persecuted for righteousness sake, for theirs is the kingdom of heaven.
11 “Blessed are you when others revile you and persecute you and utter all kinds of evil against you falsely on my account. 12 Rejoice and be glad, for your reward is great in heaven, for so they persecuted the prophets who were before you.

“The climax to the Beatitudes almost seems to be an anti-climax. It takes us back to where we started—the promise of the kingdom of God. We are told that we will be persecuted. Perhaps Jesus realized how surprised this might seem to his disciples, so he emphasized his point by applying it directly to his followers.

Jesus is telling us we are going to be persecuted for doing what's right. A true Christian will suffer persecution in one form or another. Click to Tweet

Jesus is telling us we are going to be persecuted for doing what’s right. The gospel is offensive. Now, as peacemakers, we desire to share the gospel of peace with those outside the kingdom. Sharing the gospel will not make us too many friends.

Martyn Lloyd-Jones emphasizes why citizens of the Kingdom of Heaven are persecuted writing that it is “Because he is fundamentally different, and the non-Christian recognizes this. The Christian is not just like everybody else with a slight difference. He is essentially different; he has a different nature and he is a different man.”

Sermon on the Mount Series

The Sermon on the Mount by Sinclair Ferguson

Tortured for Christ by Richard Wurmbrand

“I never knew by my nine years of preaching so much of Christ’s love, as he taught me in Aberdeen by six months imprisonment.”

“We also must understand that persecution itself is neither blessed or joyous. However, there is a kind of persecution that has God’s blessing and results in joy.”

~ R. Kent Hughes, The Sermon on the Mount

“How they (are) persecuted by nominal, religious people! That was also the story of the Puritan Fathers. This is the teaching of the Bible, and it has been substantiated by the history of the Church, that the persecution may come, not from the outside but from within.

There are ideas of Christianity far removed from the New Testament which are held by many and which cause them to persecute those who are trying in sincerity and truth to follow the Lord Jesus Christ along the narrow way. You may well find it in your own personal experience.

I have often been told by converts that they get much more opposition from supposedly Christian people than they do from the man of the world outside, who is often glad to see them changed and wants to know something about it. Formal Christianity is often the greatest enemy of the pure faith.”

Loyalty arouses their consciences, and leaves them with only two alternatives: follow Christ, or silence Him.

“Jesus assumes that his people will show these hallmarks. But because they are so contrary to our natural dispositions, he wants to stress that this really is the way to blessing. It is not the rich, the happy, the forceful, the merciless, who are truly blessed. It is the poor in spirit, the meek, those who hunger and thirst for righteousness because they see their lack of it; these alone know God’s blessing, and as a result, his many Beatitudes! So, it is important that we should think further about the blessing that Jesus promises to us. When we look at the blessings, we discover the reason it is appropriate to consider them together.

They belong together, as parts of a whole. Just as all the marks of the kingdom’s presence must be seen in our lives, so the blessings of the Beatitudes belong together. Jesus makes this plain by beginning and ending the Beatitudes with the same promised blessing: Theirs is the kingdom of Heaven. In verses 4-9 this chief blessing is further explained and illustrated in a series of six specific blessings: comfort (v4), inheriting the earth (v5), being filled (v6), receiving mercy (v7), seeing God (v8) and being called sons of God (v9).

In its simplest terms, Jesus’ teaching means this: his disciples have already—here and now—entered into the kingdom. Yes, it is still to be consummated. Yes, it is still to be revealed in its final glory. Yes, we will still wait for the day when the loud voices will say, ‘The kingdom of the world has become the kingdom of our Lord and of his Christ, and he will reign for ever and ever’ (Rev 11:15). Nevertheless, all the blessings that are expected in that kingdom in the future, are already being experienced by Christ’s people now!”

“This brings us to the end of our exposition of this eighth and last beatitude. We should add a word now for those who are not and who never will be great martyrs for the sake of the Lord Jesus Christ. That includes most of us. What about us? Well, we may be certain that God sees the little martyrs as well as the great ones, and that he is as pleased—as sometimes more pleased—with the small sacrifices and small insults patiently borne for his sake as he is with far more spectacular persecutions.

It may take more grace and it may be a greater victory for a man to spend forty years of his life at the same desk in the same office watching other men being promoted over him because he will not do some of the things that are demanded of officers in his company than it would take for John Hus to be burned at the stake for his testimony. And it may be more of a victory for a housewife to stay at home, raising her family in the things of the Lord while her nit-picking neighbors laugh at her for being humdrum and unglamorous, than it would be for a Joan of Arc to die a Rouen.

We may all take comfort in this, and turn to Christ for the victory. If we have not known persecution, even in little ways, let us search our hearts before Him. And let us ask for that righteousness of character that will either repel men or draw them to our blessed Savior.

~ James Montgomery Boice, An Expositional Commentary on the Sermon on the Mount

“This is because we belong to God, because we are His children. It is a privilege to suffer for our Lord and to identify with him in this way.”

~ Susan J. Heck, With the Master on the Mount

“What then will it be like for such saints the first thirty seconds in Heaven? The first half hour? The first day? The first 10,000 years? Certainly Christians’ persecutions for the sake of righteousness are “as sails to a ship or wings to a bird” in the voyage through life—and on to heaven.”

~ R. Kent Hughes, The Sermon on the Mount

Sermon on the Mount The: Matthew 5-7 Expositional Commentary by James Montgomery Boice

Expository Thoughts on the Gospel of Matthew by J.C. Ryle

The Sermon on the Mount: The Message of the Kingdom (ESV Edition) by R. Kent Hughes

Sermon on the Mount by Sinclair Ferguson

The Beatitudes: An Exposition of Matthew 5:1-12 by Thomas Watson

The Message of the Sermon on the Mount by John Stott

The Beatitudes by R.C. Sproul at Ligonier Connect

The Beatitudes from 50,000 Feet Sermon by Alistair Begg

The Only Way to Happiness: Endure Persecution Part 1 – Sermon by John MacArthur

The Only Way to Happiness: Endure Persecution Part 2 – Sermon by John MacArthur

Study Guide for Sermon on the Mount

END_OF_DOCUMENT_TOKEN_TO_BE_REPLACED 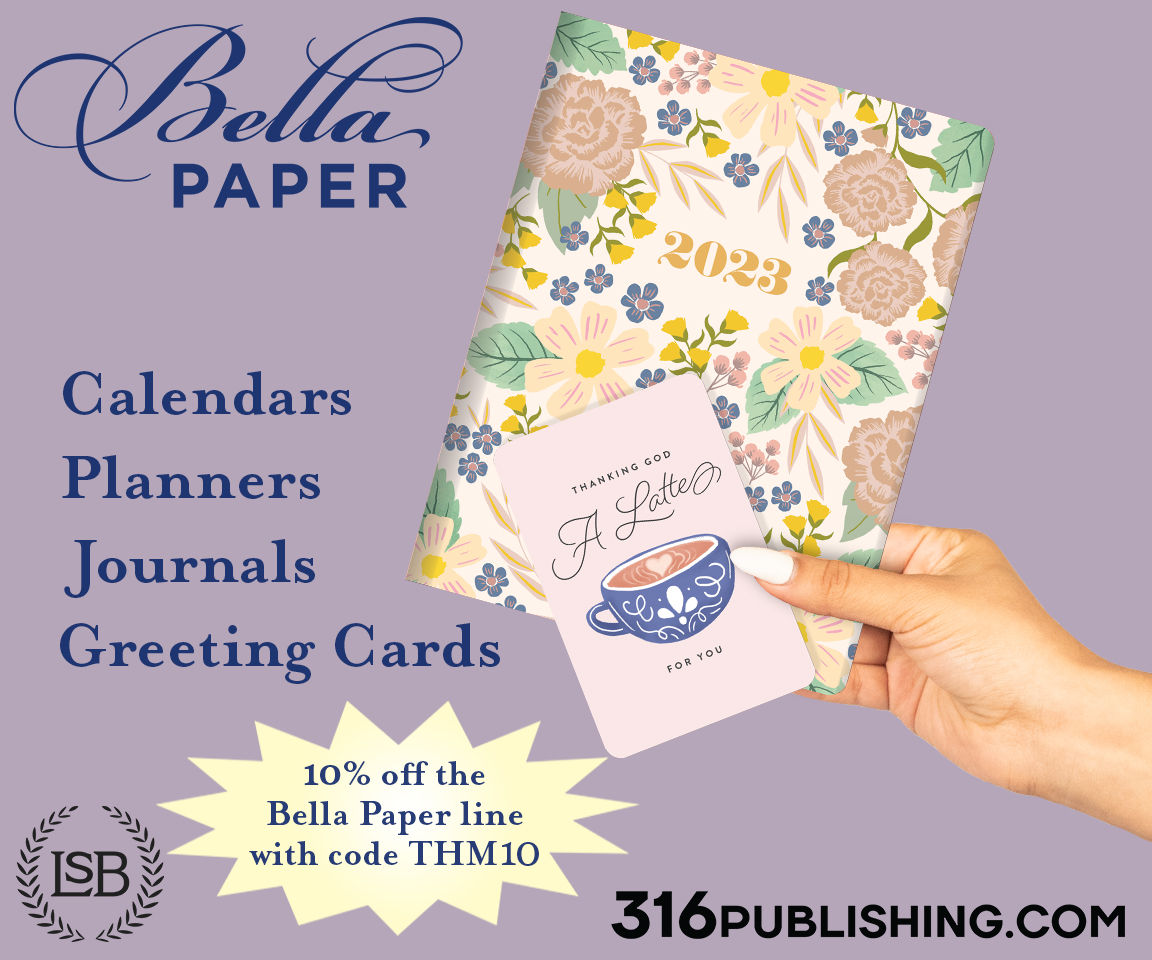 Sit with me a bit for some quick encouragement in

Friends, this is the one conference my husband and

What are the idols in our lives that need revealed

“The weight of so many responsibilities and dist

One of the aspects of the life of Christ that stan

Our continuing to pray for someone is a testimony

IT'S GIVEAWAY TIME!!⁣ ⁣ I don't do many giveaw